An evil mastermind needs one last piece of a puzzle to complete her fiendish plan but an adventuring English professor stands in her way and won’t crack. So she employs the best torture tool she knows of: Sheena and Amber, and their atrocious grammar.

“The idea for this film was borne out of our group’s mutual hatred for stupid people, and specifically stupid people who speak with horrible grammar.

This issue grated on us so much that we finally created Sheena and Amber, the embodiment of apathetic young people who can’t be bothered to speak correctly. As a way of raising the stakes we set the issue of bad grammar not just in an every day occurrence but in a matter of life or death.

Bryan and Brad, behind the camera, were able to evoke the dire mood using extremely minimal lighting and some shallow focus, combined with some ethereal smoke, courtesy of Jacqueline who spent the whole day smoking vanilla flavoured herbal cigarettes.

For a non-smoker, this was not a fantastic experience for her, and every now and again she’s known to wake up in the middle of the night in a cold sweat screaming “VANILLA!!!”” 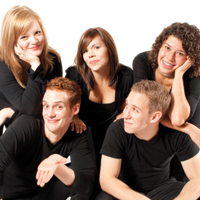 Hot Thespian Action has appeared on CBC television twice in the Winnipeg Comedy Festival, alongside Alan Thicke and Andrea Martin, received five star reviews and completely sold out runs at the Winnipeg Fringe Festival, and been nominated for a 2011 Canadian Comedy Award for Best Sketch Comedy Troupe in Canada

They continue to astound audiences with their unique brand of often physical, sometimes musical, always stripped down sketch comedy.

To see these shorts through to completion they partnered with filmmakers Brad Crawford and Bryan Verot from Strata Studios in Winnipeg.

Looking ahead, Hot Thespian Action has begun the process of writing, producing and starring in their very own sitcom.