A coming of age story about two childhood friends on the verge of adulthood. The film explores the precious memories we share with one another and the wistful, bittersweet moment of what happens when you realize you’ve outgrown a friendship.

“I met Katie and Maddie on the set of Foxfire;  I was script supervising and we hit it off immediately. They were very green but had this raw talent and vulnerability about them. I adored watching them on the monitors day in and day out that summer, watching them grow and learn.

Katie was actually moving away to attend university while we were still filming and it was nostalgic watching her go through all the steps of leaving home for the first time. We talked a lot about the transitional period at that point in your life, and the friends you end up leaving behind.

I felt especially inspired to make a short film during this time because I was working alongside acclaimed director Laurent Cantet. I loved his documentary style of filmmaking and his way of working very candidly with all of the girls. I quickly wrote a script, asked the girls if they wanted to be a part of it and recruited a team (a big chunk of the crew from Foxfire) and we shot the film in eight hours outside my doorstep in Toronto on a Saturday.

Inhaling the helium was a bit of a cute idea – and yes, I used to do it a lot as a kid – something to take the edge off being honest and pouring your heart out. It’s funny because that day we actually almost ran out of helium. Katie and Maddie got a hold of the tank during our lunch break and were singing for an entire hour in high pitched voices.” 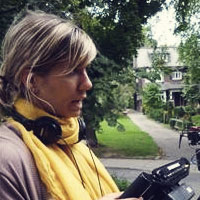 Katrina has worked in the film and television industry in Toronto for the past eight years. Helium Junkies is her second short film and premiered at the Williamsburg International Film Festival in September 2012. Her first short film, The Appointment, screened across North America and won various awards.

Katrina has written and directed webisodes for both Rookie Blue and Saving Hope and is currently story coordinating on both shows.