While preparing for his thesis defense on Sherlock Holmes, Miles overhears a mysterious exchange in the apartment next door.

He is forced to choose whether he wants to write about a detective or be one.

Paper Thin was made thanks to the support of the Atlantic Filmmaker’s Cooperative which provides the opportunity for emerging filmmakers to create their first short through a program called FILM5.

The kernel of the idea came from my producer and co-writer, Dominic Fegan. He’d spent a year teaching in South Korea where he lived in a big apartment building with ‘paper thin’ walls. He’d overhear anonymous (and presumably Korean-language) rumblings, stoking his overactive imagination.

From that central premise we developed the story of this Sherlock Holmes-obsessed grad student named Miles Crabtree. His name is never mentioned in the film, but that’s what myself, Dom and, eventually, our wonderful lead Dan Bray [all] called him.

The look and structure of the film was conceived as a hodgepodge of Alfred Hitchcock, classic Looney Tunes cartoons and of course the Master Detective himself. Props were borrowed from Plan B Merchant Co-op in Halifax and the local Holmesian society, the Spence Munros. The film itself was shot in May 2015 on the University of King’s College campus.

Since its premiere at the Atlantic Film Festival that fall, Paper Thin has played at festivals across North America picking up award nominations along the way. 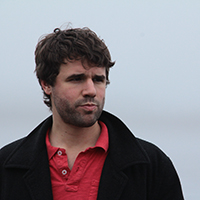 Jeff Parker is a filmmaker living and working in Halifax.

His short film Paper Thin has screened at 12 film festivals across North America and was broadcast on CBC’s Reel East Coast.