The Mindless Imagination of Thomas Porter

In a governmental experiment facility aimed at creating a society free of sadness and pain, new patient Thomas Porter works with experienced patient Meckenzie to escape.

Making The Mindless Imagination of Thomas Porter was the most challenging and rewarding experience of my life. The minute I first read the script written by my very talented classmates, I knew I wanted to tell this incredibly powerful story of Thomas Porter.

The most interesting aspect about this story is that it’s a tragedy, exploring how Thomas Porter is destroyed on an emotional and psychological level. Beginning as just another patient in the government controlled facility he lives in, and then ending as a broken, lost and insane soul doomed to forever chase the cheese in the maze he’s caught in.

The project was a big undertaking. We had three short days to shoot on a budget of $1,000. Lots of care and work went into the visuals as well, as I had a very clear vision for this film. This gave the crew plenty of freedom to flex their creative muscles.

The final film is something completely different and unique from my original idea. The collaboration with the incredible cast and crew contributed to making this film the best it can be in all aspects.

The Mindless Imagination of Thomas Porter is without a doubt my strongest film yet. I hope you enjoy watching it as much as I enjoyed making it. 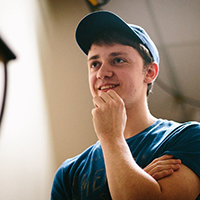 Justin Bromley began making films at 14. From the minute he picked up a camera and made his first little parody, he knew this was what he wanted to do for the rest of his life.

Continuing to make films on his own, Justin eventually ended up making two low budget features back to back, one in 2012 and one in 2013. They both screened at a small lecture theatre in the community college of his hometown of Cranbrook, BC.

As Justin’s craft got stronger and more polished, his first major achievement came in 2015 when his short film, The Wall, won a Royal Reel Award at the Canada International Film Festival in Vancouver.

That September, Justin began the motion picture arts program at Capilano University. He’s currently in the third year and plans to graduate in 2019.

Today Justin continues to practice his craft in and outside school, having just finished his latest short film, The Mindless Imagination of Thomas Porter. He’s currently planning his next short film and hopes to shoot his first feature film in the near future.