Filmmaker Rami Katz takes an intimate look at his family and cultural traditions through the making of fish soup.

The film is an exploration of my family and our cultural traditions through the making of a fish soup.

Fish Soup was developed after I told my partner, Sarah Sheridan, a humourous story about my father. After hearing the anecdote, Sarah suggested that I make a film about it. I liked the idea of working on a personal project, as I had never before even considered making a documentary about my own life.

I think everybody has a family recipe and everyone has a family story, so this film kind of taps into that and, hopefully, gets people thinking about their own stories they want to share. This was also a way for me to connect to my own grandfather, whom I was named after but never got a chance to meet because he died before I was born. 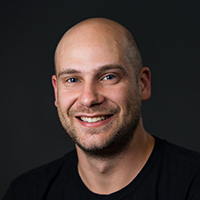 Rami Katz is a filmmaker based in Vancouver, British Columbia.

He recently graduated with an MFA in film production at the University of British Columbia and received the H. Norman Lidster Prize in documentary filmmaking.

In 2015, he was selected to participate in the RIDM Talent Lab. His short films have screened all over North America, and he is nearing completion on a new film about Jack O’Dell, a veteran civil rights activist.

For the past three years, Rami has served on the board for the Documentary Organization of Canada (BC Chapter).