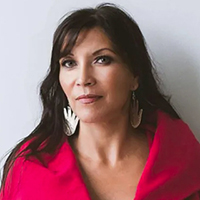 Lisa Meeches is one of the most dynamic and respected producers in the film and television industry, and a proud Ojibway from Long Plain First Nation.

Lisa has produced numerous projects to critical acclaim and more than 180 hours of film and television content including The Sharing Circle, Ice Road Truckers, Tipi Tales, double Canadian Screen Award-winner Jack, Gemini award-winner Elijah, and double CSA winner We Were Children which is widely praised by residential school survivors for its power to heal, while general audiences have been moved by its accurate and truthful portrayal of the impacts of Canada’s colonial past.

As host of her shows The Sharing Circle and Taken, Lisa is a recognizable presence across Canada. In addition to hosting Taken, which was recently nominated for two CSAs and is currently in production on its fourth season, Lisa is also co-creator, executive producer and an episode director. She is also currently co-executive producer of the international hit series Burden of Truth (CBC, CW, Hulu, Universal UK).

Lisa has been the recipient of many local, regional and national awards for her exemplary contributions in culture, media and entrepreneurship. Among her numerous awards and nominations are the 2007 National Aboriginal Achievement Award for Media & Communication, 2009 YMCA-YWCA Woman of Distinction Award in the area of Creative Communications, 2009 University of Manitoba’s Excellence in Aboriginal Business Leadership Award and Women in Film and Television 2009 Crystal Award for Mentorship. In 2017 Lisa was made a Member of the Order of Manitoba.

Lisa devotes considerable time to other causes and has been critical to the success of the Manito Ahbee Festival as its executive director. Lisa also sits on the national board of the Heart and Stroke Foundation. True to her heritage, Lisa practices the customs of her faith and is a renowned champion fancy shawl dancer.

As manager of programs and development, Kaya works across many of NSI’s courses and helps run the day-to-day activities of CBC New Indigenous Voices, NSI New Northern Voices and NSI IndigiDocs.

Kaya graduated from the University of Winnipeg with a bachelor of arts in Indigenous Studies, and has been working within the Indigenous community in Winnipeg for more than 10 years. She has spent a large portion of this time working with Indigenous youth in many areas, including acting and storytelling for theatre. She has had experience both volunteering and working on film sets, and even had a small stint on the stage and in front of the camera.

Kaya is excited to be in a role that helps hone and amplify new and existing voices in the industry.

Sarah has extensive filmmaking experience, is dedicated to her craft and has made multiple short films which have screened at Canadian festivals. She also works with youth teaching film and creating stories, and serves as a production manager and producer with local film companies.

Sarah wears many hats. Prior to working with NSI she worked in film, healthcare, childcare and social media.