Sandy Doyle is an outspoken, no-nonsense business woman. She became a worldwide celebrity with the creation of her diner Blondies Burgers.

Like most Winnipeggers, I’ve heard much about Sandy Doyle and her famous (or infamous) diner Blondies Burgers. People told me she was harsh, brash and outright mean. Perhaps she just wasn’t very good at dealing with unruly customers. Regardless, her restaurant was famous. She was famous. People were travelling from all over the world to eat her food!

After nearly 30 years in business, Sandy made an announcement that she was soon retiring. Before she left, I had to find out who the real Sandy Doyle was.

I discovered there were two people. The real Sandy and the character she created to serve the customers: Blondie.

Over the years, Sandy and Blondie have merged to become the person she is today. I like to call her “The Alice Cooper of the Restaurant Business.”

This film serves as a tribute to Sandy and everything she has achieved. 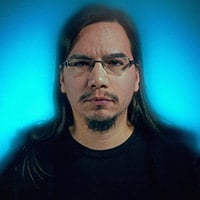 He spent time as an editor at the National Film Board. He has worked on hundreds of television shows, documentaries, feature films, short films, commercials, music videos and movie trailers. His work has reached audiences around the globe.