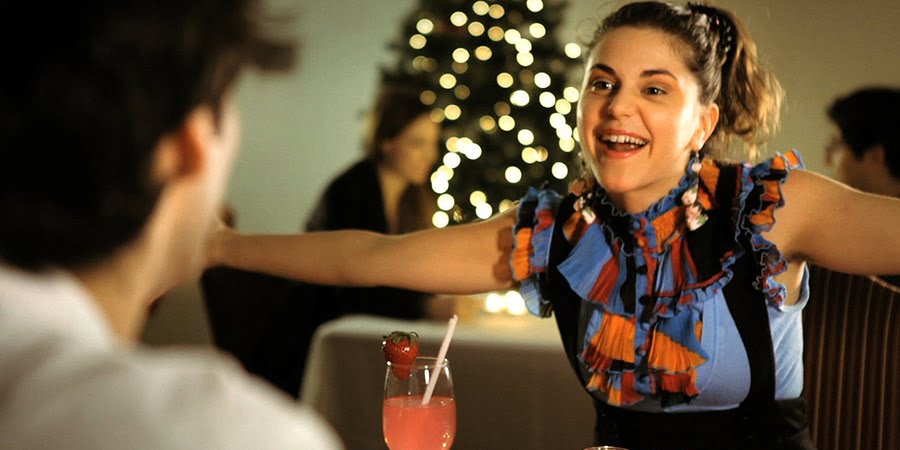 Paul has won two tickets to Taiwan. He decides to try speed dating to find someone to take with him and finds more than he expected.

“Polar Bear Love was a response to the 2011 Ottawa International Film Festival 72-hour challenge. The challenge involved making a short film from concept to final product in three days based on several catches.

The theme was travel to Taiwan and we were required to have hockey sticks, a reference to Ottawa IT Fashion week and a character that was a public relations film enthusiast in the short film. In addition, we had to include “It is true, a ship is safest in the harbour but that’s not why ships are built” and “Hey, it’s Ryder” (with a Southern drawl) as dialogue.

The inspiration for the name of the film comes from a joke that was to be included. Question: “What do you get when you cross a polar bear with a penguin?” Answer: “A polar bear.”

Every aspect of Polar Bear Love was a collaborative effort. The catches were revealed on a Thursday night. We came up with the concept of speed dating to make it natural and plausible to have the random props, characters and dialogue all in the space of a short film. Everyone chipped in with ideas and strategies to make it work and the writing began immediately. Friday was spent securing locations and props. Saturday was shoot day and we edited all night to get the final product delivered by the deadline on Sunday.

Polar Bear Love won the judges’ favourite award at the 2011 OIFF 72-hour challenge, went on to win Painted Lips and Lolly Licks: The Sexy Film Festival 2011 and was a semi-finalist in the 2011 CBC Short Film Face-off, where it enjoyed its national broadcast debut.”

Angelia Hughes started off her television career in front of the camera as a local sports reporter which soon led to her hosting High School Sports Zone. Her experience grew and took her as far as Montenegro where she hosted and produced an internet-based travel show. Stepping behind the camera, she’s been involved in many different TV and film productions on the technical side of things as a camera assistant from Flashpoint to Mike Holmes.

Ben Walker has been producing films and videos since 2003. His clients range from rock bands to the Red Cross. He is currently working on two documentaries, one which examines Tony Fouhse’ series USER, Portraits of Crack Addicts. The other film follows a small group of artists and poets who have developed an interest in a mysterious man who, during the 1980s, wrote over 150 cryptic messages in Toronto’s back alleys and streets.

Karim Ayari is a young Canadian filmmaker whose documentary Lost Rails: Into the Kingdom, about three Canadian travellers in search of Cambodia’s legendary Bamboo Express, was recently acquired by CBC Television. In 2009, Karim founded Splitklips, a small production company which specializes in corporate, informational and promotional videos as well as television commercials. Karim’s latest project is Thirteen Downs, a feature film which he wrote and directed. It opened the Ottawa International Film Festival in August 2012.

Luca Fiore is an award-winning music video director who loves what he does with all his heart and has great trouble writing about himself when asked. His work has been shown in two NYC film festivals and broadcast all over Canada.

Ivana Borojevic is a filmmaker based in Ottawa.

Jith Paul is a filmmaker based in Ottawa and is producer, director, cinematographer and editor of several award-winning short films, documentaries and music videos. He is the founder of Treepot Media, Treepot.tv, and curates short films and music videos for the Treepot Indie Filmmaker Festival. He was a member of the jury for the One World Film Festival in 2012. He is currently directing a short film called Algebra about a painter grappling with the loss of his eyesight.