Mattie and Jia won’t give in to each other … even if it’s something as small as the cost of brunch. They take fighting for the bill at the end of their meal to a whole new level.

How far would you go in a fight for the bill? Bill, Please! was born out of a lunch date with my best friend. When the bill came, we naturally argued for it. 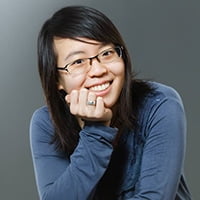 Jessica Han obtained a BFA from Simon Fraser University with a major in film production and a minor in theatre production.

She has worked as assistant director, production manager, camera operator, camera assistant, boom operator, sound recordist and grip on all sorts of productions.

Apart from her film endeavours, Jessica loves theatre and has been involved in various shows both behind and on the stage.

She is currently working as a theatre/audio-visual technician in Vancouver and writing her next story.